Last Saturday I went with some friends to the Texas Rally for Life. Here are some photos and thoughts about the rally. I had a hard time capturing the thousands of people there in one photo. Many of the women at the rally have had abortions and are struggling with the consequences of that decision. I thought the people with red tape over their mouths were some of the loudest people at the march. If you ever see someone with Red Tape with the word “Life” over their mouth it means they are praying silently – crying out for our unborn children. If we do not speak for those who cannot, who will?

Note the girls sticker. Democrats for life. I believe that the end of abortion will come from the Democratic Party. Some of the Republican establishment doesn’t want to end abortion lest they loose their pro-life base. That doesn’t mean we should start voting democrat but we should hold our supposedly pro-life republican officials to a high standard to prove they are truly on our side and not just playing us. I would guess that 7 out of 10 of the people there were catholic. I wish evangelicals would care more, but they just don’t. We will have to answer to God for our deeds done in the body. We will have to give an account of how we spent our time and our money. 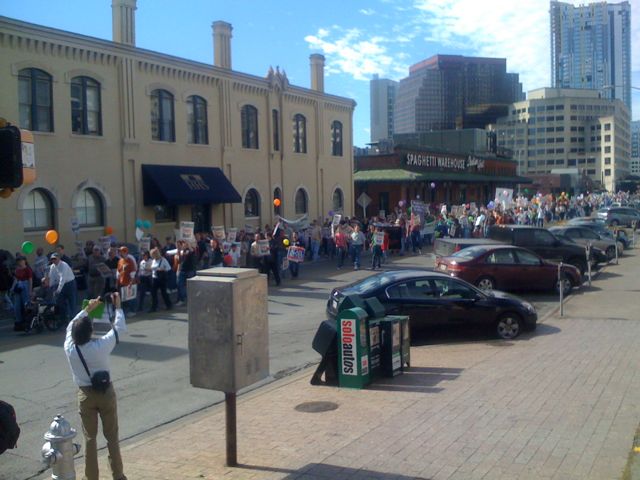 An interesting change this year from the previous years I have gone was the lack of chanting. I led a few chants but mostly everyone prayed. Many of the Catholics spent the whole time reciting the Lord Prayer or doing Hail Marys. There seemed to be a growing sense that Abortion was our sin and that we needed God’s forgiveness and His mercy. The only candidates who had any supporters at the rally, that I could see, were Ron Paul and Alan Keys. The overall lack of Pro-Life presidential candidates saddens me. Children are not the only ones hurt by abortion. Men, Women and our economy suffer as well. Again I had a hard time capturing the enormity of the crowd on my iPhone. So I’ll just tell you. There were a lot of people there. This is a booth of the New Wave Femmes a Pro-Life, Pro-Women, Pro Jesus, Pink Haired Feminists group. I don’t know much about them but they seem to be doing a great job reaching the unborn and the mother.

The sign she is holding is referring to Norma McCorvey the “Jane Roe” in Roe v Wade. She was once an abortion champion but since the trial God has captured her heart. She is now a Catholic Pro-Life advocate and leader of the Roe no More.